Blessed to be a Blessing

As I sit down to write this morning, I am overwhelmed with a sense of responsibility to tell this story well.  Running errands this morning after dropping off my children at Kindergarten, I couldn't stop thinking and praying about this family.  I wondered if Rasha, the two-year-old girl who drew our attention at the train station on Sunday night, slept any last night at the station.  Has her fever subsided?  Did her four-months-pregnant mother eat well last night?  Did her uncle get ahold of his wife and six children who are still in Turkey?  How is her aunt doing, not knowing when she'll be able to join her husband in Germany?  As I entered our elevator, I thought about those who have ridden the elevator with us in the last week, their faces, their stories, their needs.  And I cried, again.

We attempted to find a family to host on Saturday night, but sufficient housing options had been created for refugees to stay overnight before continuing on by train the next morning.  We continued to prepare our home for guests, not knowing if the window had closed for us to host any more, but praying for more opportunities to meet needs and show love.  On Sunday afternoon, we read that Germany would be closing its border to refugees in the evening between Salzburg and Munich (for those traveling without the proper visas).  We received a call from the non-profit at our main train station asking if we could still host that night.  After putting our children to bed, I took some donations to the station and checked in to gather a family.

We said we could take five.  A family was found.  "Are six okay?  One is a child."  We agreed.  They hesitated and spoke with the translator with great concern.  The translator informed me that they had lost tens of thousands of Euro to smugglers along the way; they were rightfully concerned.  The translator assured them of our desire to help without any cost to them; they were stunned and relieved.  A little bit of confusion ensued, and we had a family of six adults and one child to take home.  They said they were okay with one sleeping on the floor, so we grabbed a tram home.  One man, Nazim, spoke some English.  He asked on the tram if the train had no driver; I pointed out the window at the front behind which the tram driver sat.  He explained to the others, and they all were full of wonder on their first tram ride.

At our home, they took turns showering.  I was able to help Dilan bathe her two-year-old, Rasha.  I wondered if it was the first time in a month...Rasha was enthralled with our children's bath toys and giggled through half of the bath.  As each person came out of the bathroom, they smiled.  They were clean and wore clean clothes given to them at the station.  I think they must have felt as if they'd gained back a piece of honor, to show outwardly that they still matter.  They are human.  They are valued.  It was humbling to watch the transformation and honoring to be able to be a part of it.

The men had tea and snacks and smoked and talked on the balcony while the women prepared for bed, and we had the honor of playing with Rasha.  They openly offered small pieces of their story throughout the evening and morning.  We learned about their spouses and children in other countries.  They shared that they had been on the road from Turkey now for 25 days.  A brother-in-law had been killed by Assad, leaving a wife and two young children.  They showed us a picture of the fatherless children.  Nazim had served in the military in Syria, but he left to fight against Assad until realizing he needed to take his family and flee.

The night was quiet.  They slept "deeply" and "peacefully". We were all thankful.

In the morning, we made multiple pots of Turkish tea and offered them a breakfast familiar to their culture.  Gregory ate with the men and had a mini Arabic lesson.  We pulled out an atlas and shared home towns with each other.  They gifted us with a laminated card with a chapter from the Koran, and we spoke with each other about our faiths.  They asked to see a New Testament, asked if we had one in Arabic.  We shared some online resources, and they sat around the table listening to some verses from the Book of John in Arabic.

We gave them what we could -- access to internet for an evening and morning, a backpack, children's medicine, a small doll and stuffed animal for Rasha, a coloring book and colors, snacks to to take along, a bib, a cell phone charger, use of soaps and combs and razors, food and clothing...  At the train station, we bought them a SIM Card and minutes for their phone, to be able to be in touch with their family in Turkey and Germany (a huge need for many of the refugees here).  We exchanged contact information and pictures taken and told them we would be praying for them.  Goodbyes were again difficult.  Rasha didn't want us to leave.  Nor did we.

Later that afternoon, Gregory stopped by the train station to see if they were still there, bringing them another gift, serving them strudel, and spending an hour being together.  They were confused, receiving conflicting information from people and not sure what was going on.  He helped translate some articles for them to know the current news and tried to find another place for them to stay that night, but they wanted to stay at the train station.  We think they were hopeful the situation would change, and they didn't want to miss an opportunity.  When Gregory had to leave, Rasha cried.  Gregory swallowed down his own tears, and Nazim walked him out of the station.

Last night, as Gregory and I debriefed the experience, he shared a few potent thoughts and feelings with me.  We spoke about how blessed we felt in attempting to bless others.  We spoke about the joy (and humorous blunders) of attempting to show hospitality to these people in a way that conforms to their culture.  We spoke about how blessed we are to have so much.  We couldn't stop thinking of two-year-old Rasha sitting on the floor in the train station.  We feel such a deep sense of gratitude to God that their story hasn't been our story thus far.  We haven't known war and suffering like this.  Our kids haven't had to live through it, other than now being a part of blessing those who have. 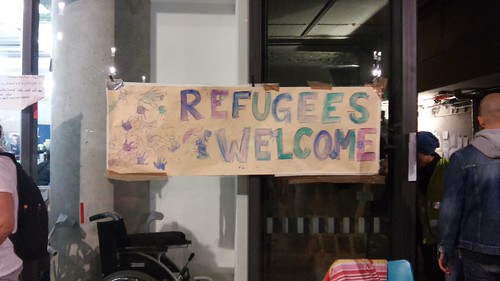 Despite the excited and loud greetings he received from our children when returning back home from the station this evening, Gregory quietly said something that really touched me, something that I too had felt while cleaning and doing laundry all day.  "Our house feels empty."  These dear people who filled our home with needs and life and blessing are greatly missed.  Bring them hope, Jesus.  And bring us more people to love.
Posted by Kim for the Kings at 9/15/2015 11:38:00 AM

Read our musings by topic

Read our musings by date